If,like me, you love scratch building you might be thinking "well 6mm is to small to do any scratch building so it's not for me."
Well I'm here to tell you nothing could be further from the thruth. To be honest I used to think the same thing. But then, once I tried it, I found that it's actually easier to create something for the smaller scales because you can afford to be a lot more fuzzy with your details. Now I'm not saying you should just glue some matchsticks together, squeeze your eyes halfway shut and call it whatever you like. But it is a fact that in 6mm if you want to make say a door,you can just cut a small rectangle and not bother with a doorknob or hinges and it will still look good.
Suddenly projects which I wouldn't even have dreamt of tackling in 28 or even 15mm  seemed a lot less daunting and I actually found myself building more things more often.
I think I've built more 6mm stuff than any other 2 scales put together in both terrain and vehicles.
But don't take my word for it, here's some pictures.

This force of quad legged walkers was also completely scratch built / kit bashed together in about an afternoons time. 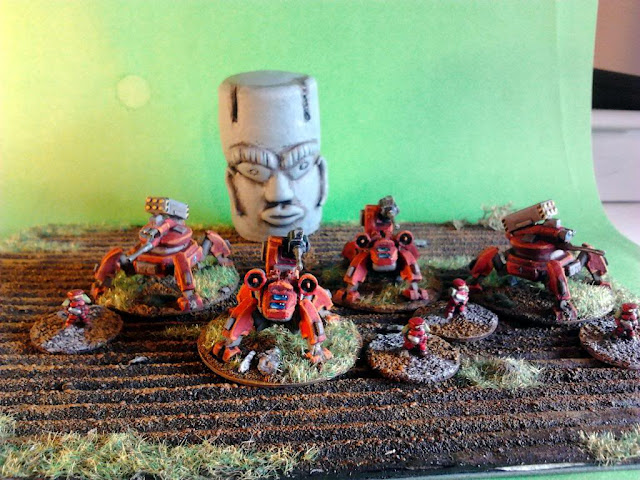 Still don't believe me?
Here, let me throw in a little tutorial for one of the walkers for you then.

First we'll start with a list and picture of the materials used.

- One 15mm backpack from National Cheese Emporium.
- a length of iron wire.
- some plastic tubing(from a q-tip).
- a toothpick.
- an old giftcard.
- a piece of 2mm scrap plastic(5mm wide).
- a gatling gun from my bitsbox. 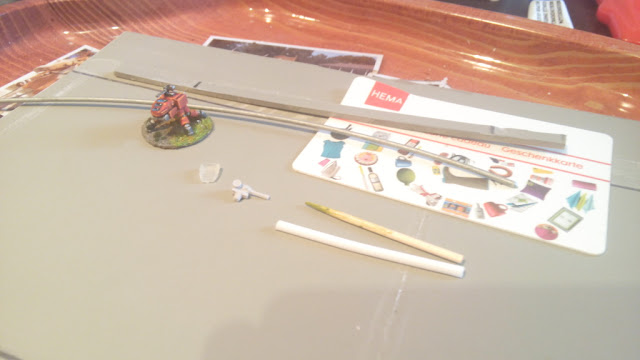 Cut everything down to size. The only things I really measured were the grey plastic bits which, together with the backpack, are going to form the main hull of the walker.The rest I just sort of measured by eyeball. 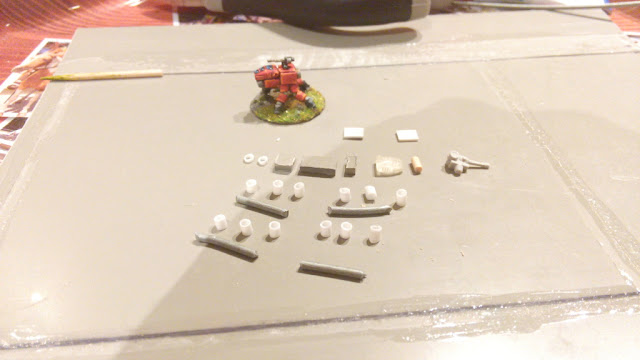 Next bend the wire pieces into a kind of a flattened S-shape and thread on 3 pieces of the cottonbud tubing. Glue the backpack, piece of thoothpick and the three pieces of 2mm plastic together...             ...realise the smallest piece shouldn't even be on there, remove it and cut out the 2 small pieces you see lying underneath the main hull. 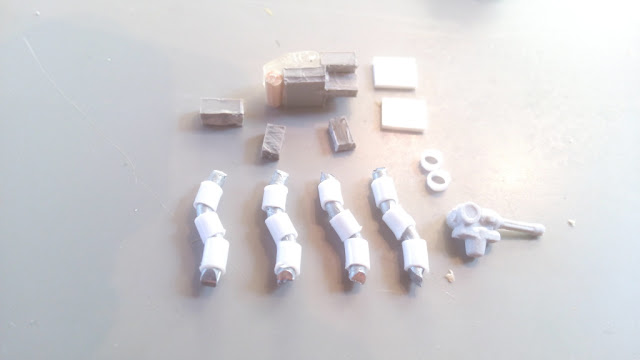 Now it is just a matter of glueing the giftcard bits onto the sides of the main hull and, when that's dry, insert the leggs into the slots thus created. Finish by glueing on the weapon and add the q-tip tubing rings to the back as jumpjets. 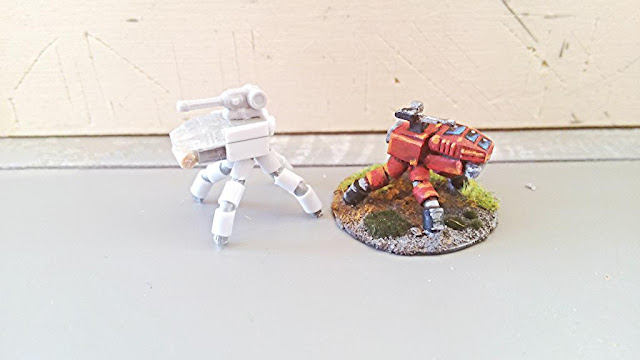 So there you have it, one 6mm walker ready for a coat of paint and then off to battle.
As usual I'd love to hear what you think and if you've done any 6mm scratch building yourself be sure to drop a link in the comments below.

A review from the leadpile.

Between begining construction of  my 6mm cityboard and then joining the Planet Ares crew, I decided to put all my 15mm on the backburner and concentrate on 6mm for the time being. So I ordered a whole bunch of stuff online, and now I have to wait for it to arrive...                                       ...I get restless when I have to wait.
To pass the time I started digging through my leadpile, as it turned out there were quite a few nice 6mm scifi models in there already, I thought I'd share them with you.
For now I'd like to start with the first thing I pulled out of my mountain of lead, a small force of
Dark Realm Miniatures Kraytonians ,a race of lizardman aliens.

The first pack I pulled out was the Ketzali Command pack containing the following
2 different command poses, 4 each 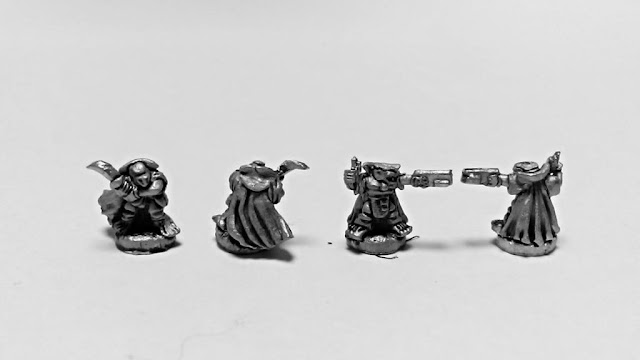 There are also 2 different trooper poses, 16 each 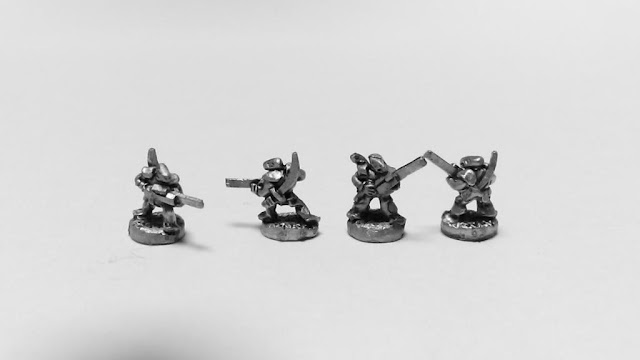 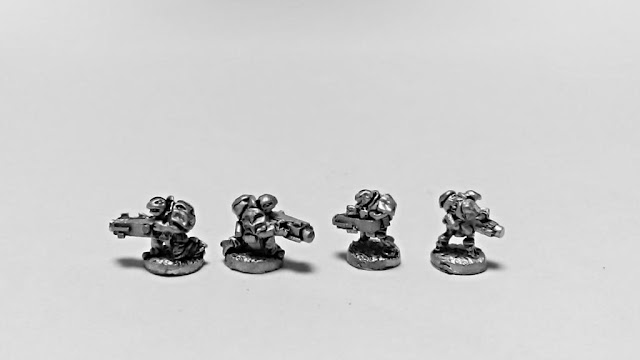 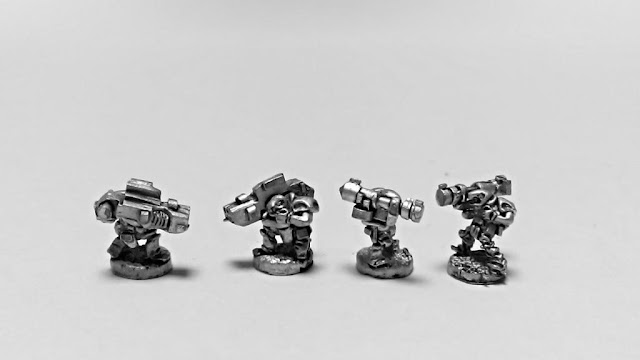 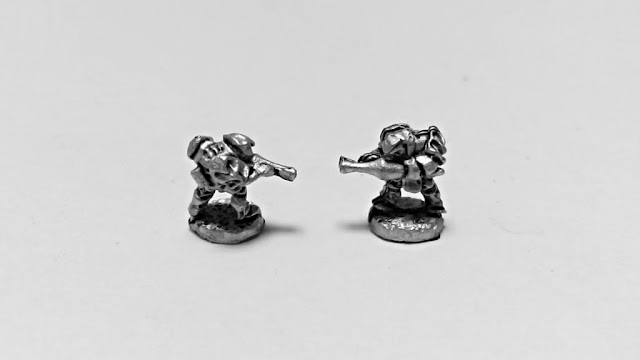 As you can see they are all basically the same troop type but the weapons can be classed as light, medium and heavy. My only gripe with these is that there is only one pose of the basic (light) trooper, that being said, they are all nicely detailed figures with a lot of charracter.

The rest of the packs are what originally sold me on this line of minis, the Rakkat and Torakk riders and the Elohe raiders. Lizard aliens riding even bigger lizards into battle, whats not to like?

The Torakk riders are 1 pose, 4 to a pack and there are 2 different packs. Sadly this means you have to buy at least 2 packs if you want both poses (this seems to be the standard for all the cavalry), not a problem for big armies, less interesting if you're into 6mm skirmish like me. 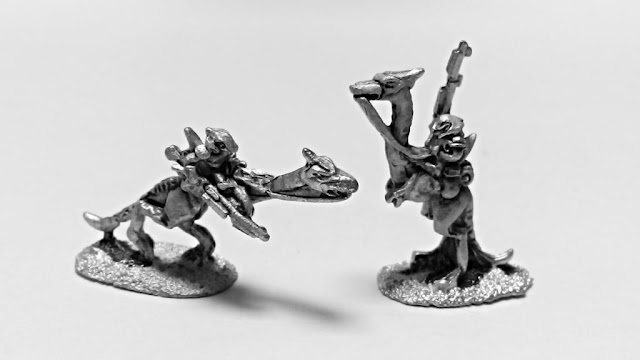 Their flying cousins the Elohe Raiders, again 1 pose 4 to a pack 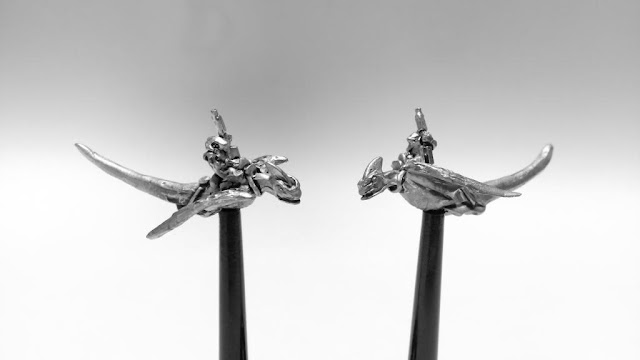 And last, but by no means least, the Rakkat riders 1pose ,2 to a pack 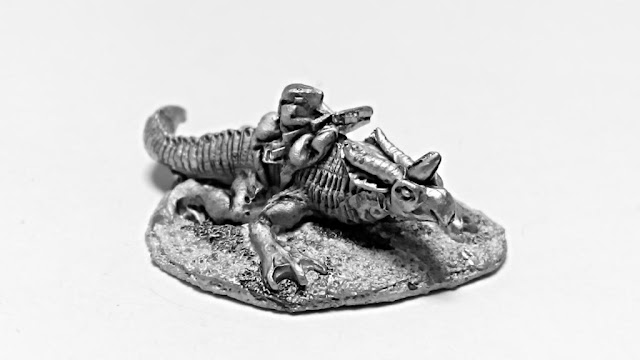 This is one big lizzard, I can easily picture him putting a dent in an APC or munching on a small mecha.

All the figures were very crisply cast with minimal cleaning required, almost everything could be scraped of with an xacto knife, only the Rakkat riders needed a little filing to get rid of a mold line running along their head and back.
I bought these at a show a few years ago and I guess they got lost between all the other goodies purchased that day but, having fondled them again now, I think I'll move them up the painting queue and start on them right after I finish my Juncker Insurgents from Angel Barracks.

Well that's it for now , if you enjoyed it, or not, leave a comment below and until next time when we find out what treasures the Lead Mountain Mines will give up next.