Last week we finally got down to making some D&D characters for my wife and daugter.
A Witcher inspired half elf paladin for my little girl and as usual my wife went the furry route and decided to play an Alseid ranger.
Now it was up to me to find them some suitable minis.
Easy enough for the kid, a demonworld elf with an extra scabbard added for his second longsword did the trick.
For my wife's ranger I started with a demonworld centaur, resculpted the tail and hooves and added antlers and the appropriate female bits. 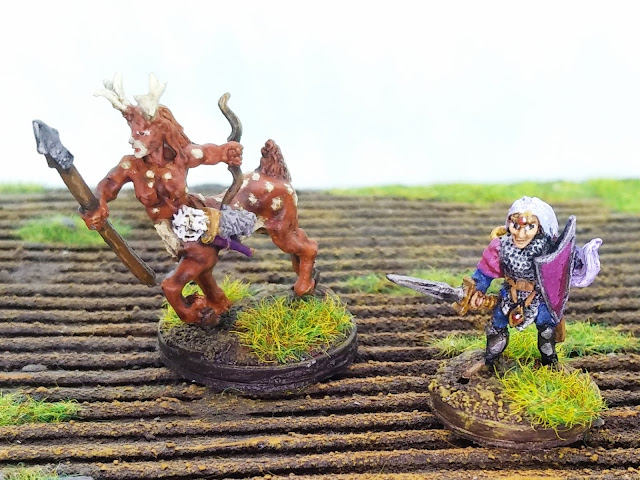 In their first adventure they have to stop a strange tree creature from harvesting villagers heads. This guy from Splintered light fits the job perfectly. 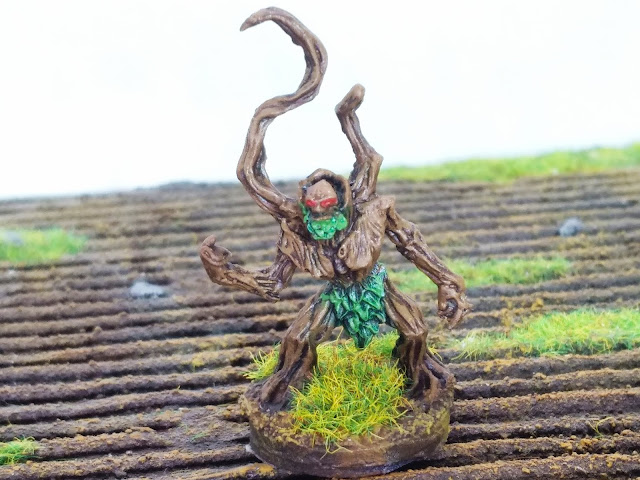 And what would D&D be without some ogers... 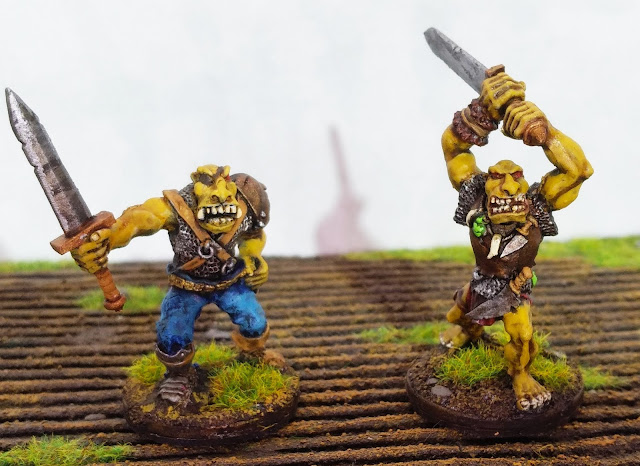 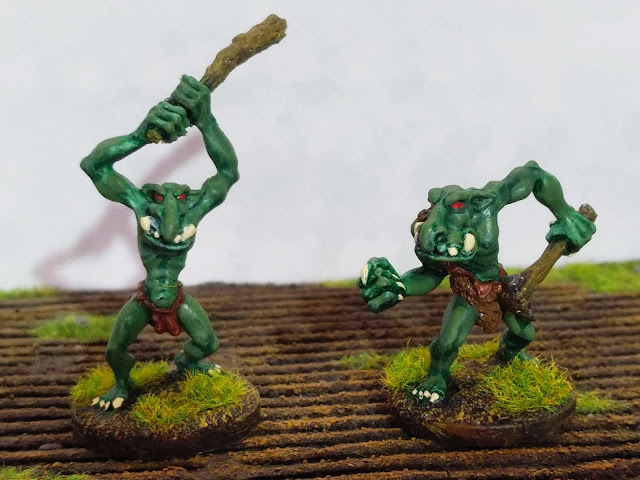 And finally, my first ever dragon miniature.
Its a plastic dracolich mini from the first edition decent boardgame.
The details were a bit soft in some places but over al I'm quite happy with how she turned out. 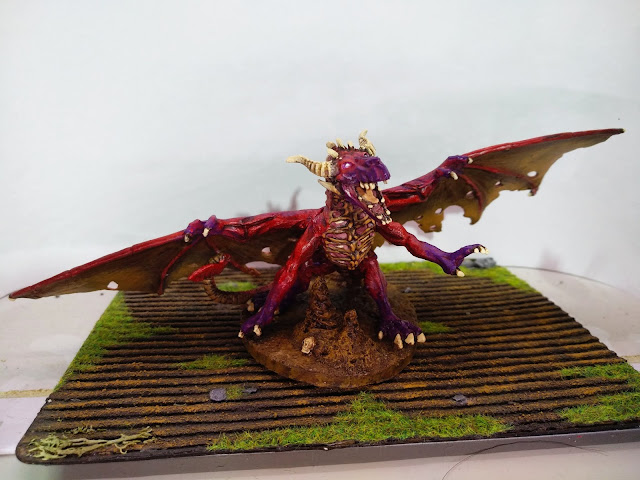 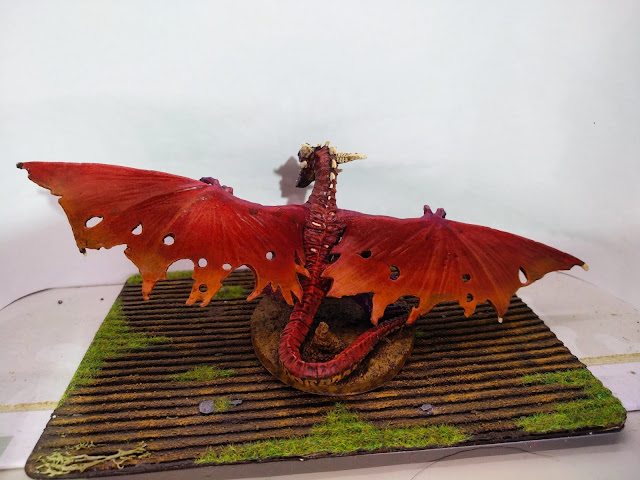 I always thought she looked a bit small next to the other minis in the box, but for 15mm she's just about perfect imo. 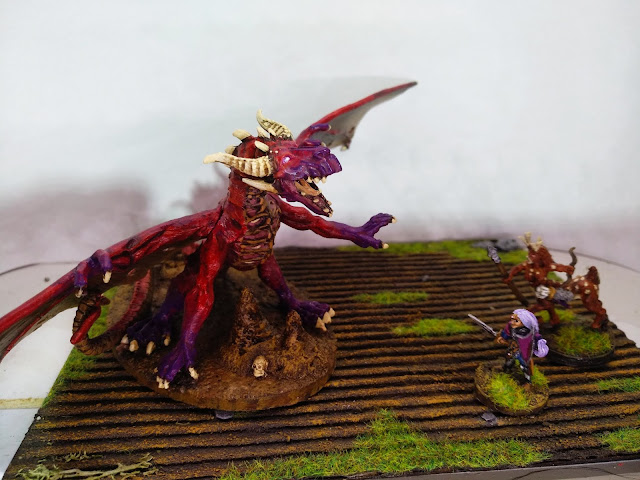 I still need to make some more bits and bobs of terrain and a miniature for the singing tree for  the finale of the adventure and then we're all set.

Posted by Stroezie at 3:10 AM No comments:

I've been in a bit of a gaming and crafting funk this last month but now I've found my mojo back and I have my 7 year old daughter to thank for it.
She was getting bored sitting at home all the time so I had given her a block of Das clay I had lying around. She took it straight up to her room and about two hours later she presented me with two monsters she'd made and told me I had to paint them so I could use them with my little men.

How could I refuse...

So here's the first, a tentacled Lovecraftian horror , which I have been informed is actually only the head of a gigantic subterranean worm. 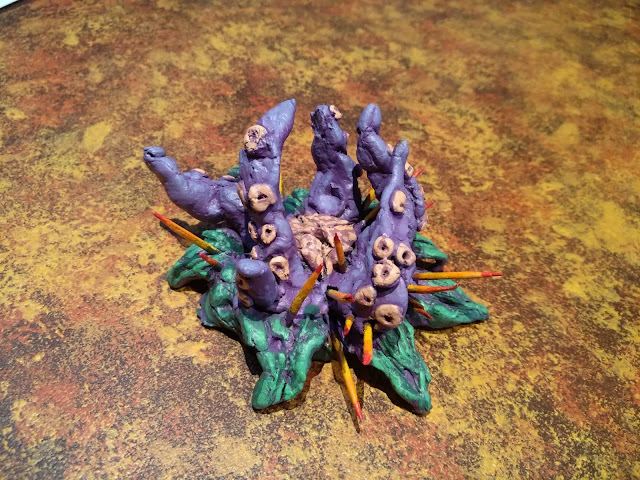 And the second one, a cave monster who lures greedy adventures into its mouth using large gemstones. 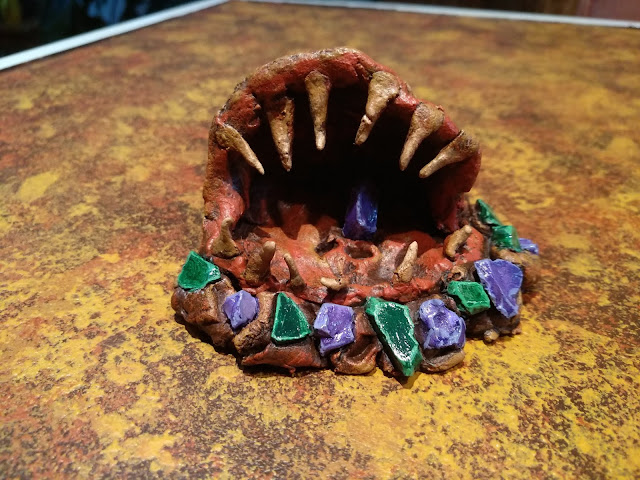 As you can see he's perfectly camouflaged and blends right into his surroundings.
They'll never suspect a thing! 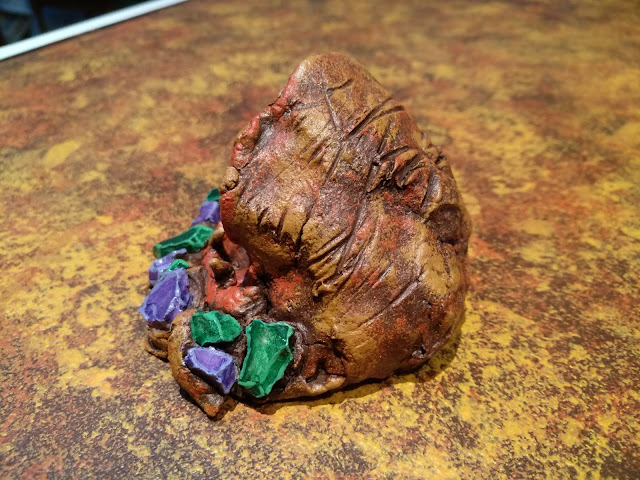 I had so much fun painting these that I kept right on going with some terrain building.
The first things I made were these stalagmite tiles for my cavern set.
Really simple, I just twisted some aluminum foil into the desired shapes and hot glued them to the tiles, some basing sand and paint and Bob's your uncle. 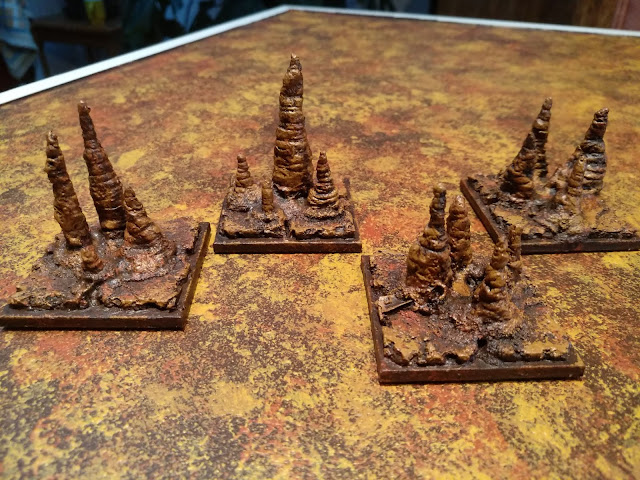 Going for more easy wins I decided to finally base and paint all my left over green stuff mushrooms. 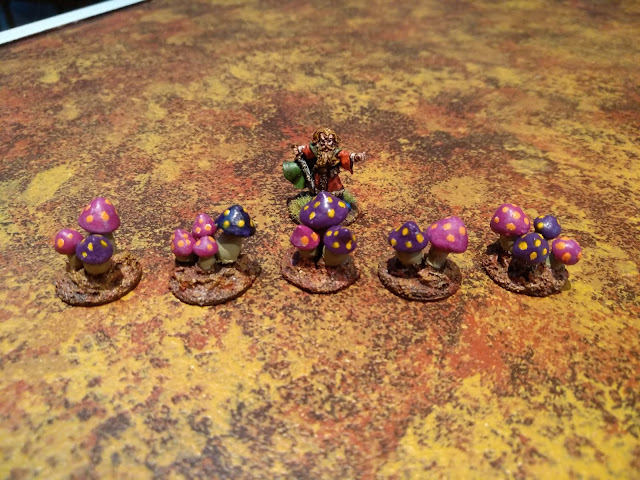 And then I finally finished painting the board I'm going to be using my dungeon/cavern tiles on. 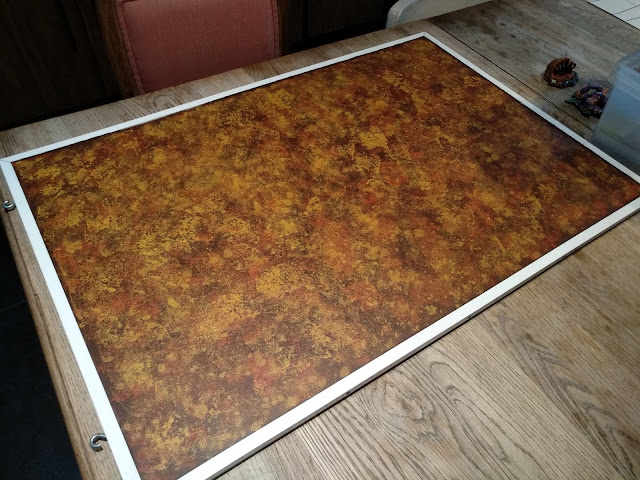 It's a magnetic whiteboard which I picked up at a second hand store for the princely sum of  €3.
All the tiles are mounted on magnetic paper so I can set up a scene before a session and not have to worry about things shifting when I pull it out.
As you can see they stay on really well. 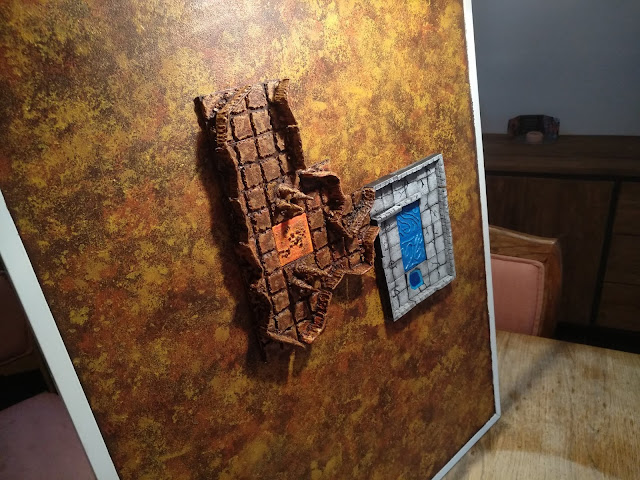 That's it for now,
I'll leave you with some glamour shots of the new beasties on the table... 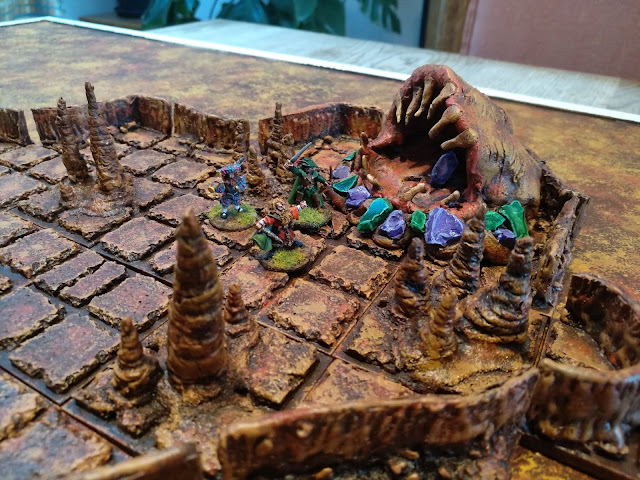 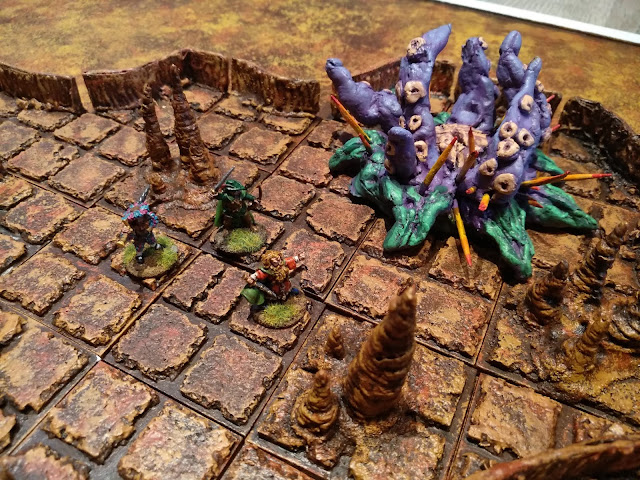 What's this? A mushroom grove... 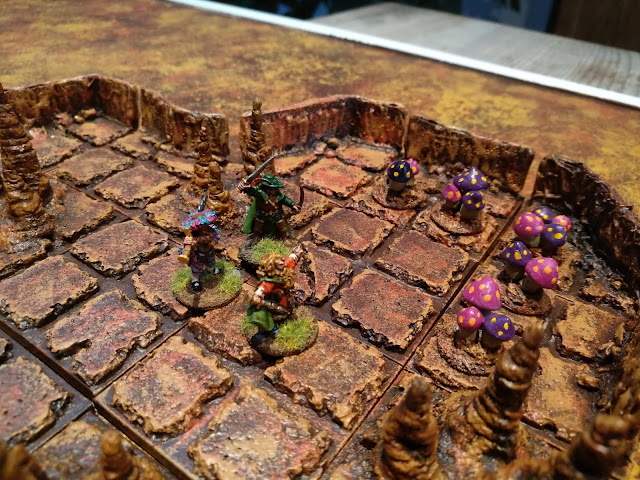 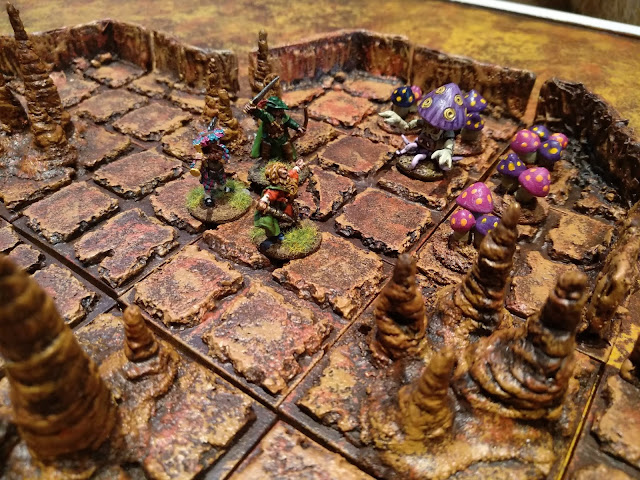 Parallel worlds or what !?!