Thought I'd post some pictures of what I'm working on at the moment and hopefully shame myself into finishing them before I start on anything else.

First up a new tree for my alien jungle.
(idea stolen from some pictures I saw in Legion4's photobucket ) 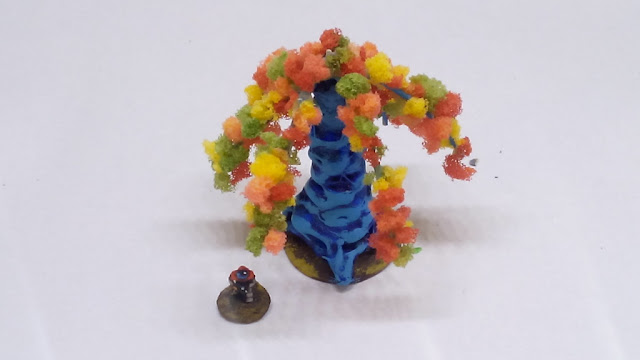 Made out of hotglue over a floralwire frame, I need to make at least 4 or 5 more of these on large bases surounded by a number of the previous plants to bulk out my jungle terrain and give more of a dense overgrown look to the board.

Next a "martian flier" inspired airship/skiff patrol craft, the main component is a milkcarton lid.( the figures are place holders, just to check how it looks) 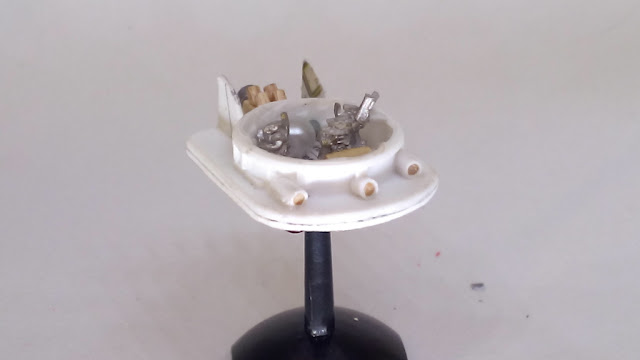 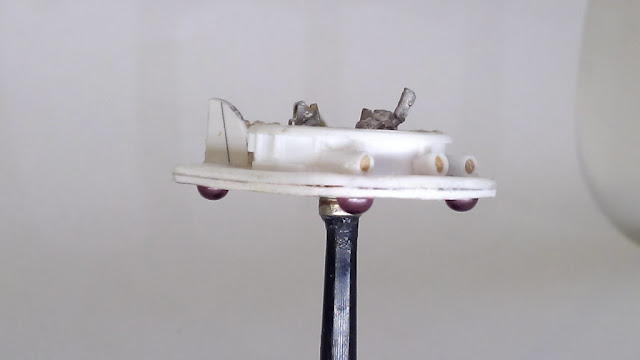 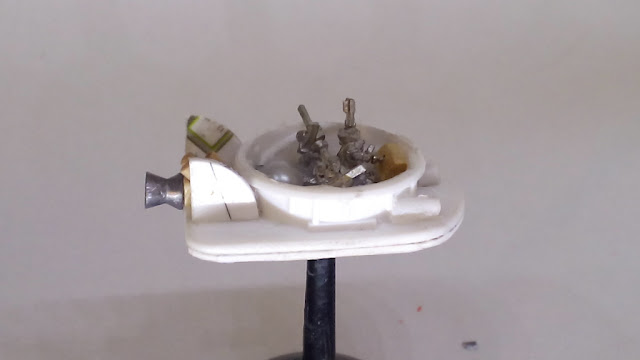 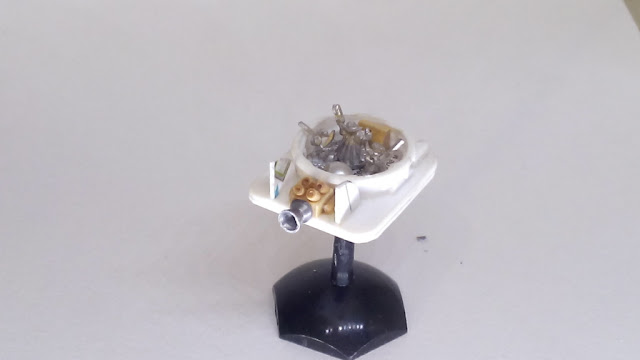 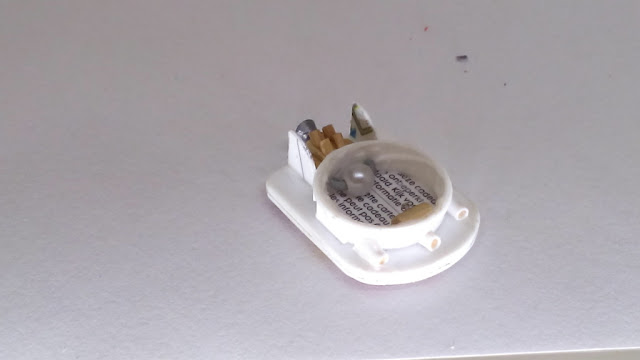 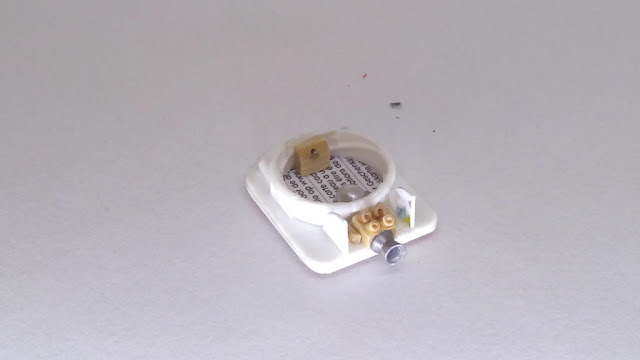 All in all I'm pretty pleased with how this turmed out, I'm going to build at least 2 more of these and then start thinking about building something similar but 2 to 3 sizes larger.

And another project I just started, a junglecrawl tile set inspired by the old GW game Lost Patrol
Going to have to plant a lot of tiny trees ;-) 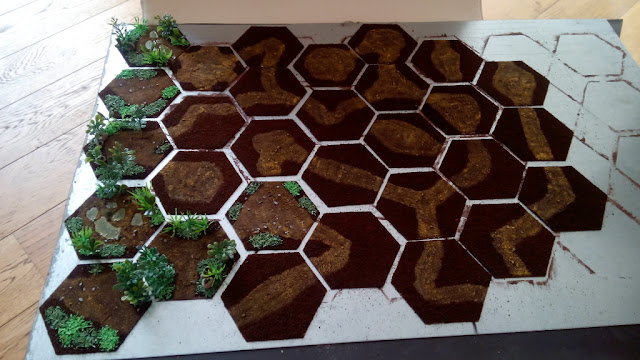 Some of the tiles feature natural hazards, like the two swamp tiles above, the next picture is an experiment to see if I could make something resembling a giant venus flytrap to put on some of the other hazard tiles. (more hazard ideas are always welcome) 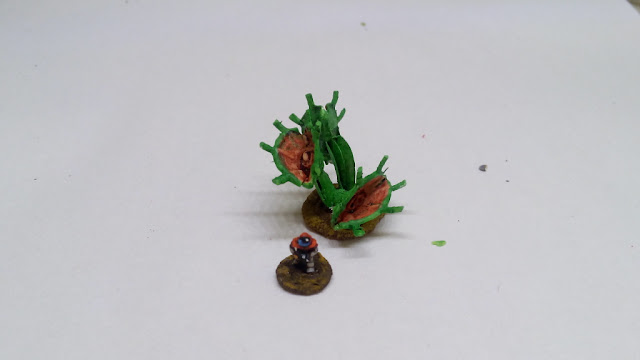 I need to make enough of them to fill up a goodly portion of 2 tiles.

Posted by Stroezie at 9:12 AM No comments:

As this is going to be a sword and planet adventure I wanted something that looked alien but also something that would look like it could grow on an earth like planet.
As much as possible I tried to take my inspiration from the stranger things found in nature here on earth, you'd be surprised how many weird and wonderfully alien looking things grow here :-) 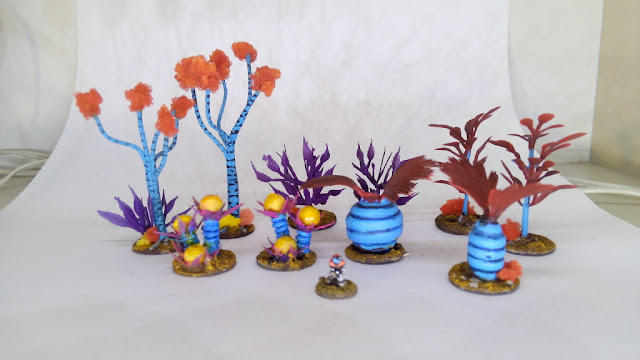 Here you see a selection of the various trees that are regularily encountered in the jungle
The plants on Kessel-D93 contain high levels of phycobilins in their chloroplasts giving them red, orange and yellow colors.
They were made from aquarium plants, floral wire, tooth picks, clump foliage and a number of different beads. 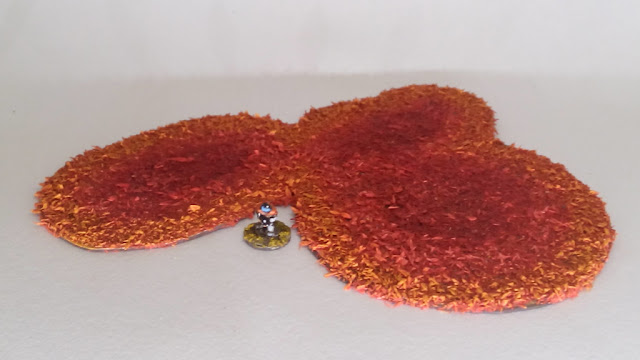 There is no real grass analogue on Kessel-D93 the closest thing is a sort of red moss witch can grow in huge patches, yet strangely never under any of the trees. 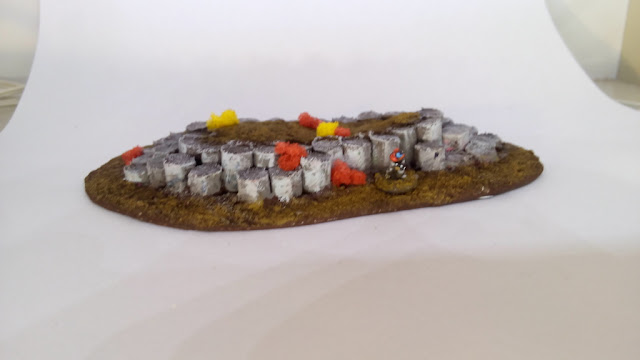 This is the first test piece for the hills I plan on building.
They are inspired by the devil's causeway in Ireland and are made up out of  hexagon shaped basalt columns formed by volcanic activity.
Construction was really simple I just hotglued different lengths of pencil cut offs to a base and filled up the interior with more hotglue and sand.

One of the really cool things in the Rogue Planet rules is the ability to attack your opponent with the local flora and fauna so I needed to build me some agressive plantlife.
I decided that my aggresive plants would mimic the other trees in the jungle as camouflage to lure their prey closer. 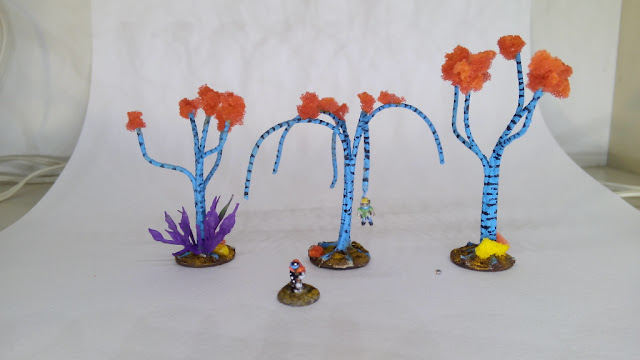 The first one here is known as the Hangman tree, I don't think this needs much of an explanation ;-) 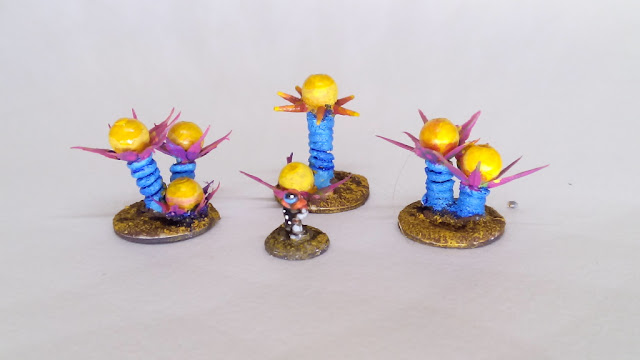 The Spiker is another agressive species of carnivorous tree which hunts its victims by shooting them with its poisonous spines. 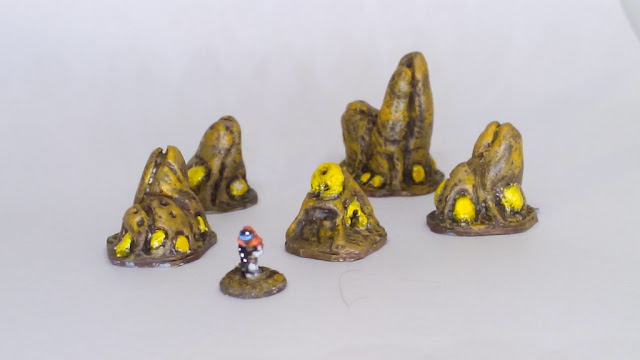 These are Drillworm  nests from Angel Barracks. I've had these in the painting cue for quite some time, I decided to move them up as they are just about perfect for something like this. 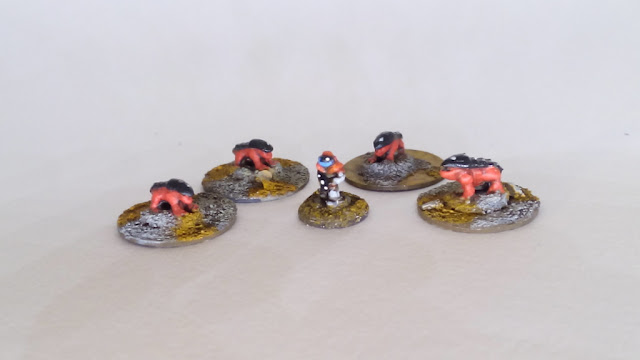 Of course AB's Razor hounds had to make an appearance to. 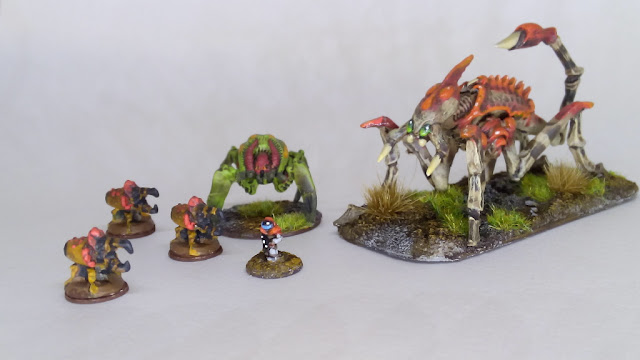 And, as on any planet, there's always the chance of encountering some wild space bugs ;-)
The small ones are from GZG the larger ones from Rebel minis

And here's how it all ties together 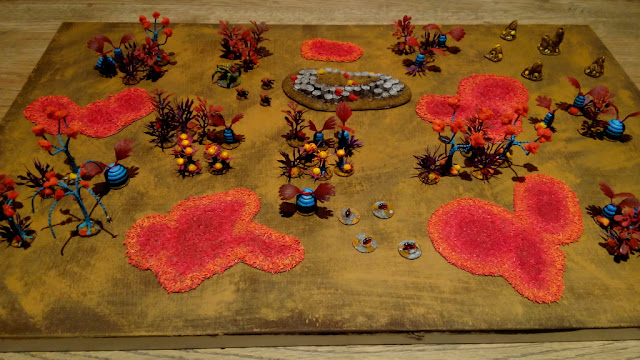 I'm thinking of building a few bigger stand of trees to fill up the board a little more to really get that dense jungle atmosphere. At the moment it feels more like the savannah, althoug that might be an interesting setting too , I'll have to think on that....

Thats all for now, I hope you enjoyed our little jaunt through the lovely forrests of Kessel-D93.
See you next time,
Stroezie.

I originally meant to post these together with my new Rogue Planet terrain but when I started typing this post I suddenly felt they deserved a post of their own so here it goes.

The mecha for this force were inspired by the New Caprice models from Heavy Gear.
I actually built these on a whim  about 2 years ago.  Even though I had great fun scratchbuilding / kitbashing them I didn't really have any idea what I was going to use them for so they've been sort of languishing in my display cabinet till now.
Now, having decided to pick up my VOTOMS / Blue Gender inspired solo campaign again, I decided to celebrate it by fleshing them out into a completely new faction. 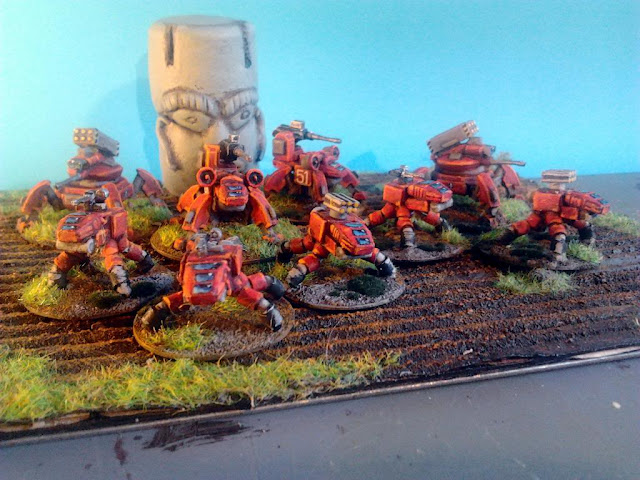 For the infantry I went with these NAC troopers from Ground Zero Games.
I wanted something that looked professional but not neccesarily military as these are supposed to be merely corperate security (no really, honest...) 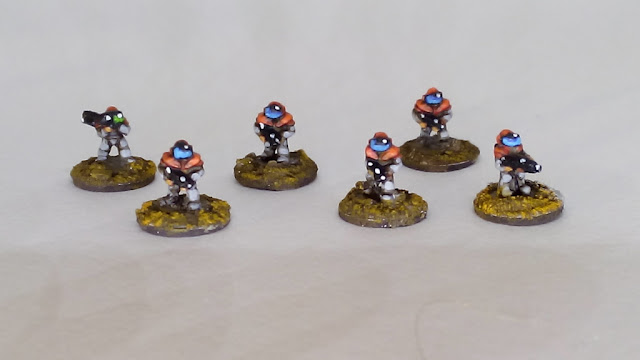 As all the other factions have air transport I wanted some for these guys to.
Again I went looking for something that was just below military grade and since all my military forces have VTOLs I thought why not go with choppers ( not enough choppers in scifi imo.)
These are Pax Arcadia Cargo Choppers from Dark Realm Miniatures.
They really are awesome little models and I am already looking for exuses to buy more of them. 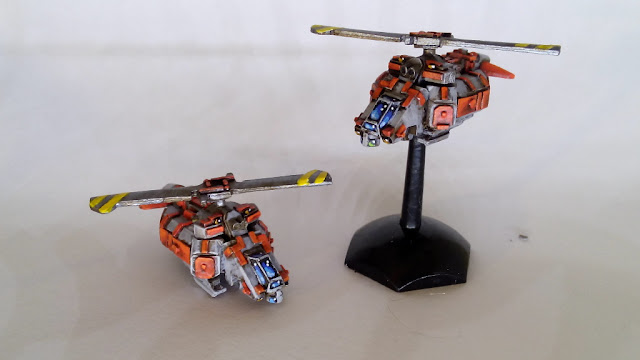 And to give them some protection 2 Pirahna Gunships  also from Dark Realm. 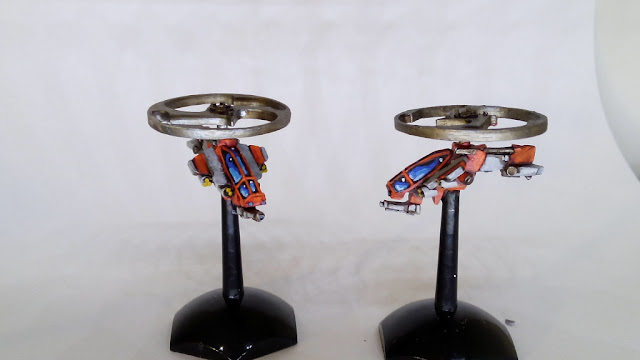 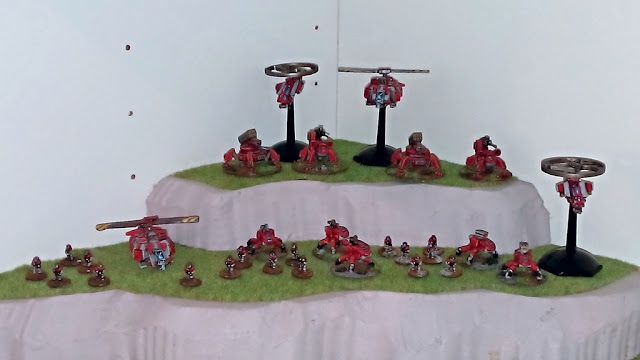 And so a new player has emerged in the struggle between the Seperatist and the Unity forces, If only we knew what they were up to.

Well thats it for now.
Next time, a tour of the strange alien jungle beyond the desert city's of the human settlers on the cut off planet of Kessel-D93.

My appologies for the long silence on this blogg.
Once again real life got in the way of gaming as I we moved house and I had to concentrate on some 1:1 scale modelling instead of my prefered 1:300 scale ;-)
Now that most of the work is done and I once again have some free time I'm totally pumped up to start painting, building and playing games so I should be back to posting on a regular basis.

Ok enough drivelling, on to the (hopefully) interesting stuff.

A troop of scouts and their officer 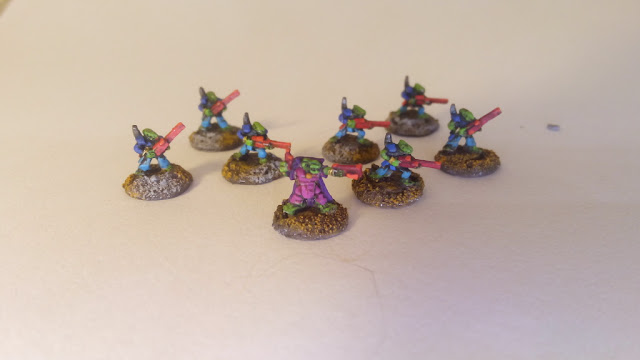 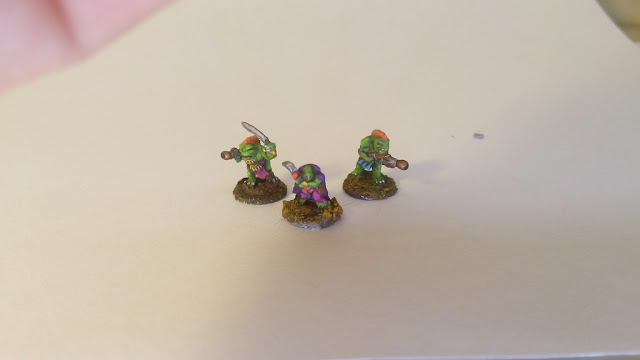 As I really liked these figures I decided to round out the force so I can use them for my Gruntz games and maybe as a starting faction for my new project, a Sword and Planet game/setting using the exelent  Rogue Planet rules by Bombshell games.

First up some medium and heavy monitors. These are the heavyly armored line troops of the Kraytonian empire. 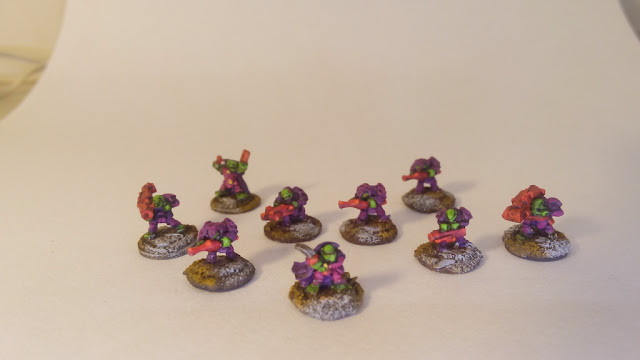 Next a small force of Torakk riders. These dragoons ride swift plains lizards and are armed with the more powerfull but heavy pulse rifle. 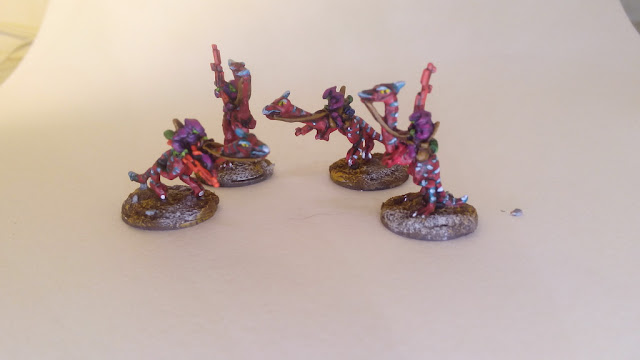 The Rakkat riders are the heavy cavalry, riding huge rock lizzards whose claws allow them to scale near vertical cliffs and tear through the heaviest armor. 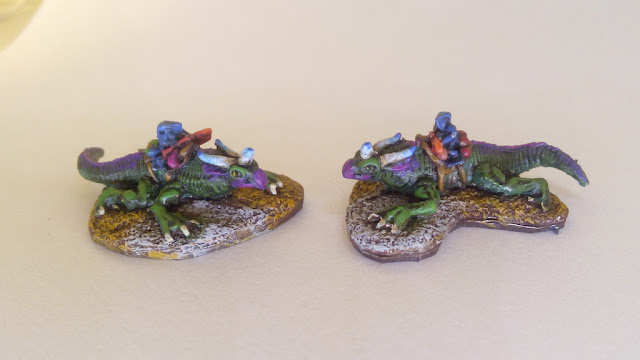 And finally the  Elohe raiders, armed with the same heavy pulse rifle as the Torakk riders these swift raiders are the bane of enemy supply lines wreaking havoc in the enemy's rear and then quickly disappearing to strike somewhere else. 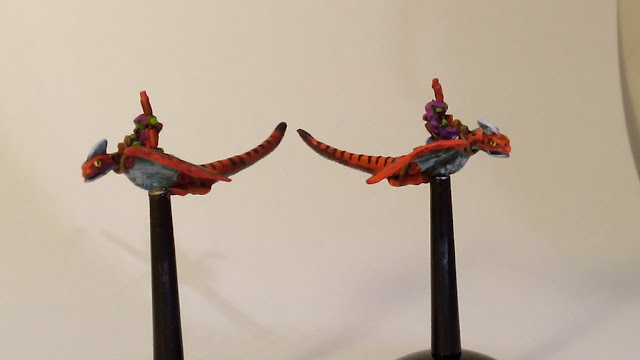 Here's a picture of the whole force so far 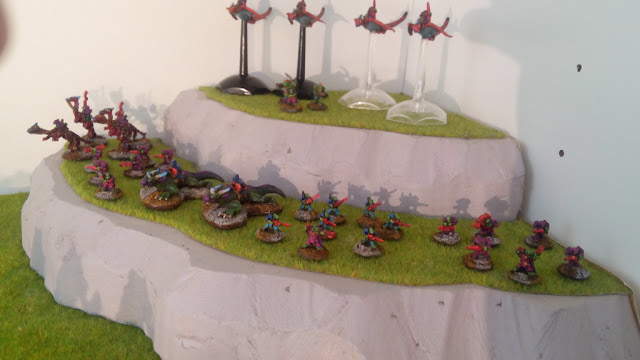 I'll probably paint some more figures to round out various units as I start statting them out for different game systems but I'm pretty happy with them so far. There's also some more different troop types which I'll be picking up at Crisis2015 later this year.

I've also painted some corperate security forces for my not-VOTOMs campaign but I have not had time to take any pictures of them yet. I'll add them next time when I post the first pics of the new alien planet terrain I've been working on.

Well that's it for now,
hopefully I'll see you all a whole lot sooner than last time.